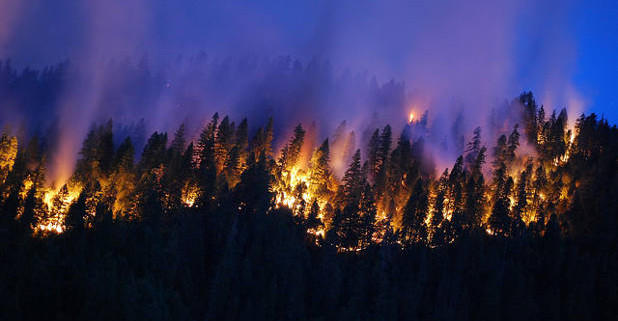 Though Christ warned that no one but the Father knows the exact day and hour of His return, Scripture provides us with myriad signs that illustrate the time is drawing nearer. Here are five key signs of the end times that are making waves right now.

The ongoing California drought has killed more than 12 million trees in its San Bernardino National Forest to date. The danger is compounded by rampant bark beetle infestations and wildfires, both of which take advantage of the trees’ water deprivation.

“It is almost certain that millions more trees will die over the course of the upcoming summer as the drought situation continues and becomes ever more long term,” biologist Jeffrey Moore, acting regional aerial survey program manager for the U.S. Forest Service, told the Los Angeles Times.

Now four years into the deadly drought, California has approved unprecedented water usage restrictions on businesses, government agencies, and individuals, in a desperate effort to conserve the state’s increasingly limited water. But with more than 93 percent of the state experiencing severe, extreme or exceptional drought as measured by the U.S. Drought Monitor, the situation looks dire indeed.

“This is the drought of the century, with greater impact than anything our parents and grandparents experienced,” said Felicia Marcus, chair of the State Water Resources Control Board, in a statement.

2. Bird flu outbreak the next step toward a new plague?

Although the burgeoning Ebola epidemic has largely been brought under control (for now), another highly pathogenic virus is just starting to rampage through the American heartland.

The H5 strain of avian flu has infected upward of 20 million birds at dozens of commercial sites from Iowa to Idaho, from California to Arkansas. Though the poultry and egg industry is taking steps to prevent any of the infected birds from entering our food supply, one can only imagine the potential devastation that could be wreaked should some of these infections slip through—potentially triggering the long-feared jump to a strain of the virus inherently infectious to humans.

A record number of sea lions have washed up, starving and stranded, on southern California shores in recent months. This ghastly phenomenon more than doubles the total of lost sea lions appearing in 2013, the previous worst winter on record for the animals.

Moreover, the record counts don’t even include the vast number of dead sea lions, many of which may never be discovered.

Government agencies and news media have blamed the “unusual mortality event” on a confluence of strange events, from warming coastal waters and unseasonably weak ocean winds to abnormal food shortages. Whatever the cause, it is clear that something strange and unprecedented is disturbing the normal flow of this marine ecosystem, and it’s growing in intensity.

4. The Altar of the Lord rebuilt in Jerusalem

One of the key unfulfilled elements of end-times prophecy is the rebuilding of the temple of the Lord in Jerusalem. For centuries, the Temple Mount has been occupied by the Dome of the Rock and the Al-Aqsa Mosque, and even today, though the site is in the State of Israel, the site is administered by the Jerusalem Islamic Waqf, a Muslim organization. In short, there are several key barriers that seem to block the way to that particular prophecy being fulfilled.

The Temple Institute is one organization vying for the temple’s reconstruction, and it recently undertook an unprecedented step in this prophetic restoration: rebuilding the Altar of the Lord.

“We know that end-time prophecy cannot be fulfilled without the rebuilding of the Temple in Jerusalem,” said New York Times best-selling author of The Mystery of the Shemitah and The Harbinger, Jonathan Cahn. “What many people don’t realize is that along with the Holy of Holies, the altar of the Temple is the most central and critical part of the Temple.”

Though the altar, which was completed in December, would comprise just a portion of the prophesied restored temple, this is just a step in the Temple Institute’s overall plan to fulfill Scripture.

In keeping with its stated goal of “do[ing] all in our limited power to bring about the building of the Holy Temple in our time,” the organization, and other supporters of the “Temple Movement,” are working to bring this prophecy to fruition in the very near future.

5. Microchip implants—the Mark of the Beast?

It has long been surmised that the Mark of the Beast could be electronic in nature, perhaps as an implanted microchip in the hand or forehead, to be used for commerce, identification and access to various elements of life under the Antichrist’s rule. Recently, one company in Sweden voluntarily piloted a program that bears eerie similarities to those apocalyptic predictions.

Employees of BioNyfiken are able to unlock doors, access their printing accounts, and pay for lunch with a simple wave of their hand, as scanners read the chip implanted within and identify the user associated with it.

Hannes Sjoblad, BioNyfiken’s chief disruption officer, predicts a future in which “big corporates and big government come to us and say everyone should get chipped.”

Meanwhile, tech trends expert Faith Popcorn revealed that, “We foresee a future in which everyone will have an implanted chip.”

What other end-times signs do you see unfolding? Sound off.